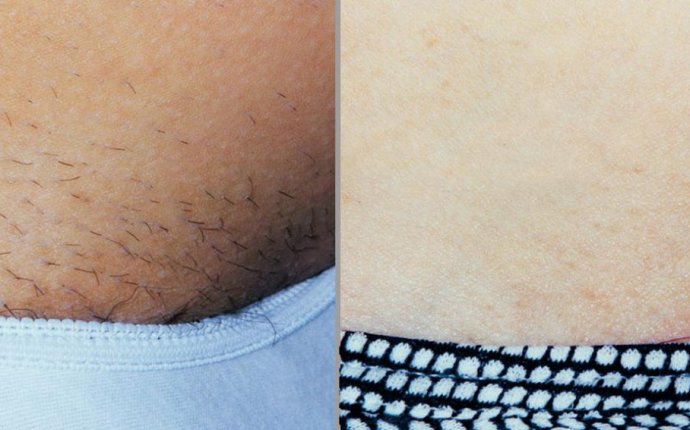 Can you Laser Remove Pubic Hair?

Women seem to be on a never-ending quest for the perfect method of bikini line hair removal. One of the most popular and oldest methods is waxing, in which a layer of the sticky stuff is applied to the skin and pulled away, removing hair at its root. But with a newer and more permanent laser hair removal treatment to hit the scene, many wonder whether this is a better option. The answer depends on a number of factors.

Laser hair removal comes with a stinging sensation, similar to having a rubber band snapped against the skin. But it still hurts less than waxing, and it’s a little pain upfront in exchange for a painless and hairless future.

Laser hair removal is quite pricey, approximately $200 a session as of time of publication. Six to eight laser treatments, 10 weeks apart, are generally required for best results - setting you back up to $1, 600. According to MayoClinic.com, "best results" equates to a reduction in hair regrowth by up to 80 percent. A salon wax costs about $30 for a bikini line, but multiply that by 12 and that’s $360 a year for as long as you'd like to keep it up. An even cheaper option is an at-home waxing kit, though keep in mind it can take some practice to get the hang of this. Another consideration is the time factor. If you choose laser hair removal, you won't be spending nearly as much time on a waxing table in the long run.

One obvious difference between waxing and laser hair removal is the fact that laser treatments are more permanent, so you better be certain that the style you choose is something you’ll still want to have when you’re 80. That’s tricky though, because pubic hair styles change. Also, hair removal is not always a guarantee – if you’re treated with the wrong laser on the wrong setting, laser treatments won’t be effective at removing all of the hair. Even with the correct laser and settings, it's possible that hair could grow back at some point after treatment, though it may grow back finer and more sparsely than before.

Laser hair removal treatment is FDA approved, but salons and spas are not themselves regulated, so do your due diligence when researching the clinic where you’ll be receiving laser hair removal. Also keep in mind that this is a relatively new method compared to waxing, and the long-term side effects are not known. David Goldberg, a dermatologist practicing in New York, Florida and Massachusetts, and Russell Kridel, a Houston plastic surgeon and laser expert, told Livescience that they recommend consumers seek only physicians and their staff to receive laser treatment, as people have been burned in spas. Bikini waxing at home or in a salon has risks as well, including infection, or in rare cases where a salon has poor hygiene practices, contraction of sexually transmitted diseases.

A common and minor side effect of laser hair removal is a breakout, because the treatment leaves hair follicles open for a few days. An over-the-counter hydrocortisone cream or antibacterial lotion can prevent this. Skin pigment changes, swelling and scarring are also rare possibilities. Waxing side effects include redness and inflammation, pain, bumps, pimples and ingrown hairs. Trimming the area pre-wax, exfoliating before and after and applying a warm compress pre-wax and a cold compress post-wax can help reduce side effects.

Waxing works for all skin color and hair colors, but laser treatments work best on those with light skin and dark hair. This is because pigment molecules within the hair absorb the energy of the laser beam, destroying the hair follicles. Up until recently, laser technology didn’t work on dark skin and dark hair because the energy of the laser would be absorbed by the pigment in both the skin and the hair, causing skin to burn, though new machines have fixed this. But laser treatments won’t work on those with blond, gray or white hairs because they have little pigment, so if you have this type of hair, stick to waxing.

@Notorious ✨: Brazilian waxes for the rest of my 20s till I can afford laser hair removal 😊😂👌🏽 #markmywords