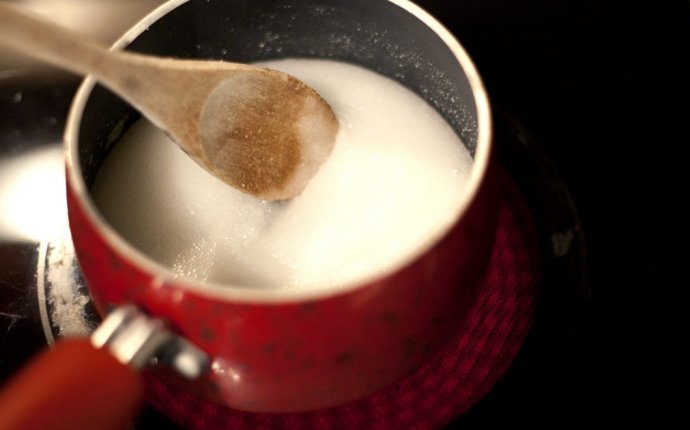 Maybe the idea of being spread eagle on a table as a stranger gets up close and personal with hot wax sounds like a lot to handle. Perhaps your accountant advised you to cut either your spa appointments or your daily coffee. Did your plans get cancelled and now you've got a whole Friday night to kill? Enter the at-home Brazilian. Nandi Wagner, Lead Esthetician at Bliss Spa in SoHo, shares her tricks of the trade.

1) What type of wax should you use?

A hard, or stripless, wax. "They're formulated for sensitive areas like the bikini, underarms and face, and what they do is adhere to the hair, not the skin, so when you go to pull it off, you're cutting out a lot of the irritation by not pulling the skin, " says Wagner. Strips are easier, she admits, but more painful, so it's worth learning to navigate hard wax.

2) Hard wax needs to be heated up. How do you make sure it's the right temperature?

"It should be the consistency of cold honey, " says Wagner, who advises doing a test patch on your inner wrist to make sure it's not too hot or too runny. Keep in mind that you'll likely need to re-heat after 10 to 12 minutes of waxing.

Right after a shower, when your skin is clean, soft and dry. You shouldn't use any lotion or oils before, but there's no need to prep with an alcohol pad, either—that can be overdrying. Avoid waxing when you're on your period (extra-sensitive) or after you've been drinking (we get the impulse, but you're more prone to bleeding; instead, take an Aspirin for courage in pill form).

4) What's the best position to be in?

In a butterfly position with the soles of your feet touching, on a towel and in front of a mirror. And skip the mood lighting—you need bright light to make sure you're not missing any details.

The top inner thigh by your hip area. "It's a horrible analogy, " says Wagner, "but it works: Think of mowing the lawn. You don't start in the middle of the yard where the grass is thickest, because if you do, your mower is going to get stuck and stall out. You always start from the edges where it's thinnest and work your way in."

"Apply it in a swirling motion, like you're putting peanut butter on a piece of bread. This ensures that you're catching all the hair in the wax. When you're done, the wax should be about the thickness of a quarter or nickel."

7) How do you know which direction to pull?

You want to pull in the opposite direction of hair growth, but it can be tricky to figure out which way that is sometimes. A cheat sheet: "On most people, hair grows in toward the center. This is biological—the hair is there to protect our reproductive organs. So if you're starting at the top, the hair grows downward, so you want to swirl the wax on in a downward motion, then pull up towards you. When you're in the back, do the opposite, " says Wagner. When you get down to the sides of your inner thighs, the hair is growing toward the center, but sideways, so you will need to switch from pulling up or down. When the wax feels tacky, but not sticky, it's ready to be removed. Make sure that the end of the wax is in a place where there's no hair, so you can get the best grip on it as possible.

8) What about those supersensitive areas?

9) And that hard-to-reach area?

"Evolution hasn't evolved so that we can see the rear, so this is a hard area to do on your own, " acknowledges Wagner. "If you're going to attempt it, you want to lean back—not so much that your back is flat on the ground, but at an incline—and work one side at a time. You can also prop one leg up and leave the other in butterfly position. Your hair should be growing up—but you're going to have to check by feeling your way around—so apply the wax up and pull down."

10) What should you do when you finish?

First, make sure you've removed all the wax and no areas are stuck. If there is leftover wax, use coconut oil to break it down. (Bonus: It's antimicrobial, so it'll help keep bacteria at bay.) Second, if your skin is very red, or you're prone to ingrowns, do cool compresses with cotton pads or a wash cloth, then pat on a bit of witch hazel. Third, wear cotton underwear for the next 24 hours to avoid irritation. Fourth, don't workout, steam or sauna for 24 hours, as your follicles are still open and likely to become clogged.

Easiest way to Remove Back Hair

Does Shaved Hair Grow Back Darker

How to Shave your Back Hair?

Hairstyles for Mens Back of Head

Does Getting Laser Hair Removal Hurt